IAG’s 2015 catastrophe reinsurance has been constructed in a similar manner to prior years.  The higher level of cover than 2014 reflects the increased size of IAG following the acquisition of the former Wesfarmers business, whose previous standalone cover has been cancelled.

Following completion of the 2015 catastrophe cover, all expected reinsurance synergies as part of the integration of the Wesfarmers business have been realised and will be recognised in IAG’s earnings up to 31 December 2015.

IAG’s catastrophe reinsurance covers all territories in which IAG operates, with the exception of its joint venture interests in India and China which have their own reinsurance arrangements.

The overall credit quality of the 2015 programme remains high, with over 89% placed with entities rated A+ or better.

The combination of all catastrophe covers in place at 1 January 2015 results in maximum first event retentions of $250 million for Australia, NZ$250 million for New Zealand, $25 million for Thailand and Malaysia, and less than $1 million for Vietnam.

In addition, IAG has a separate cover of $150 million in excess of its natural peril allowance of $700 million, which runs in line with the financial year ending 30 June 2015. 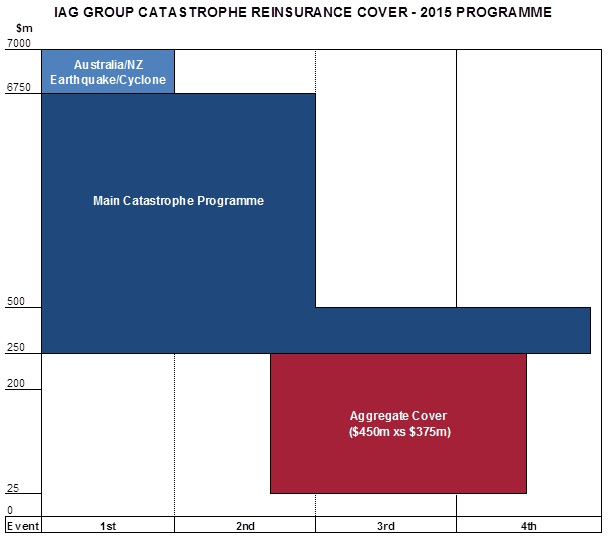